Vaccines present one of our strongest tools in fighting – and possibly even eliminating – disease. Inactive and live-attenuated vaccines have gone a long way toward limiting the spread of disease, but many pathogens prove more difficult to fight. More traditional vaccines work by eliciting a humoral immune response, but viral vector vaccines elicit a cell-mediated immune response. This comes with risks, however, and developing a proper viral vector vaccine requires a careful balance of risks and efficacy.

Traditional vaccines introduce an inactive or attenuated version of a whole pathogen. These stimulate an immune response while reducing the risk of infection. There is, however, some risk that the pathogen can revert through evolution back to a virulent state. Recombinant or subunit vaccines were developed to mitigate this risk.

The humoral immune system functions by detecting proteins known as antigens on the surface of pathogens, which it recognizes as “other.” In recombinant vaccines, these antigens are isolated and delivered to the host to stimulate an immune response. The benefit is that they cannot revert to a virulent state because the antigen proteins are not inherently toxic. Unfortunately, most recombinant vaccines stimulate only a weak immune response and require an adjuvant to induce a stronger one.

In contrast, viral vector vaccines, induce a strong immune response without the need for adjuvants. Viral vector vaccines induce both a humoral and cell-mediated immune response. B cells respond to the viral vector, while the vector itself introduces the genetic code required to to create an antigen into a host cell, thus stimulating the cell-meditated immune response, in which T cells seek and destroy host cells displaying the antigen. This has the benefit of creating a more robust immunity, especially for diseases unsuitable for whole-pathogen or subunit vaccine development. 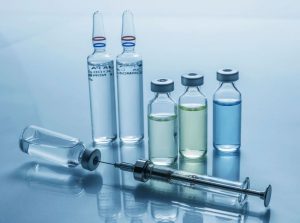 Many types of viruses are available as vectors, and each has specific advantages and disadvantages. Whether one is right for developing a vaccine depends on the desired outcome. Some are better suited to long-term gene expression than others. Some only infect dividing cells or non-dividing cells, some infect both. Some have a high immunogenicity, while others do not.

Often viruses with a high immunogenicity come with the drawback of facing pre-existing immunity. Here the effectiveness of the vector as a vaccine is reduced because the body has encountered the wild-type virus and effectively fought it off. Vaccinia virus, adenovirus, and sendai virus all have a high immunogenicity and simultaneously a high likelihood of pre-existing immunity.

Retroviruses and lentivirus both bring the potential for long-term gene expression, but also the risk that they will develop into replication-competent forms, which could lead to tumorigenesis and cancer.

Adeno-associated virus (AAV) is a popular candidate because it is a non-pathogenic virus that is well understood and well suited to long-term gene expression. It predictably inserts its genome into a specific location on chromosome 19 in humans, which offers an enormous advantage when compared to retroviruses, which can insert themselves randomly and lead to cancer. AAV has the drawback, however, of not replicating quickly and having a small genome of only 4.8 kilobases making it unsuitable for larger gene complexes.

Multivalent viral vector vaccines are one of many strategies to increase efficacy.

To qualify as a vaccine, a viral vector must be predictable, stable, proven safe, and suitable for large-scale production. To mitigate the aforementioned drawbacks, a few different strategies have been developed including a prime-boost regimen and multivalent viral vectors.

A viral vector vaccine must often be administered more than once. The patient then risks developing induced immunity to the original vector, which will make each subsequent dose less effective. To combat this, a prime-boost strategy is often used, in which the vector for the prime dose differs from the vector for the boost dose. Another strategy is to administer two different vectors with the same transgene in a single dose.

The latter strategy of combining multiple antigens from multiple pathogens into a single viral vector genome could come with the added benefit of reducing costs associated with vaccine production and storage. It is common to mix vaccines against multiple pathogens to reduce costs, the most well-known example being measles, mumps, and rubella. Manufacture of these cocktail vaccines can be complex, however, as each component must be manufactured separately and mixed carefully. By combining recombinant genes from multiple pathogens into a single viral vector, it could be possible to reduce manufacturing costs even further.

Viral vector vaccines are an area of great potential, with further research happening every day. Though balancing the risks and benefits can be difficult, the potential rewards for human health and longevity are enormous.